You are here: Home / Self / It’s Not You: Don’t Take the Blame for Others’ Actions

Last summer, I discovered a new obsession: planners! I have always been a paper planner girl. It helps me to stay on top of things (as long as I open it up and look at it). But last summer, I took my paper planner usage to a whole new level, ordering a personalized, hand-made planner that took 6 weeks to get to me. 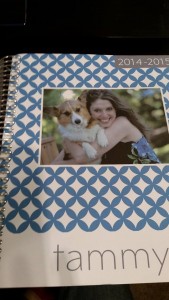 I had to join a planner support group on Facebook to get me through the wait. (Go on and laugh here.)

Soon, I discovered the joys of decorating for the seasons by using washi tape, how to make “dashboards” that keep all of the notes that you need at your fingertips, and something called “planner buddies.”

Planner buddies are the new pen pals. Once every few weeks, you send some happy mail to your new-found friend. Inside the envelope you find colorful stickers to remind you of your favorite TV shows, coil clips to attach things to the spirals in your planner, post-it notes, and more.

So much fun, right?

Obviously, when someone posted that they were looking for a planner buddy, I said, “Pick me, pick me!”

I was so excited. But we had to wait four more weeks for her planner to arrive.

During that time, I started gathering a small stash to share with her. I even made stickers. I was so proud of myself.

Right as we were about to begin, she sent a message saying, “Funds are a little tight, and I see everyone else going overboard with lots of things for their planner buddies. Would it be OK if we were a little less than that? Maybe we did something randomly throughout the year instead of every month?”

Fine by me! And just in time for my birthday, I received some fun mail, full of goodies.

The happy package I was to mail soon slipped my mind. And before I knew it, the end of the month had arrived.

Crap! The Valentine's Day goodies I excitedly set aside were now outdated. I needed new things. Another trip to the store, and more time to devote. Since it was a fun trip, I didn't mind so much.

The day I finally mailed that package, I was relieved and excited. I rushed home to send her a message that said, “It's on the way!” Even though I was later than I had planned, I was still following our time frame, right?

She had blocked me on Facebook. All I had for her was a mailing address, and the goodies were on the way.

I felt crushed. I had offended someone. I messed up.

Each day, I kept checking and hoping that maybe there had been an error. I thought that maybe once she got the package, I would hear from her again. I actually found some other goodies I had purchased for her and thought about mailing them, along with a note about what had happened and my apologies.

In the end, I decided to leave well enough alone.

However, it didn't stop that little twitch of pain: “I've been blocked! I was trying! I thought she said that she didn't want to send something monthly anyway.”

For a few days, I kept beating myself up. Finally I thought, “Tammy, this is someone you've never even met. You've not spoken to them on the phone, ever. You exchanged one goodie envelope each. She kept changing the rules of the interaction, lowering the standards. She never reached out to you to check-in to see if things were OK or if you had some kind of crisis situation in your life. She just blocked you. Yes, you can feel a bit sad. But really? How is this the end of the world? Why are you taking on her actions?”

I ended up having to stash the stamps and washi tape I had gotten for her out of sight so I wouldn't be reminded of the situation every time I saw it. While it still stings a little, I've had to accept that she handled the situation differently than I would have.

I also had to consider other things, like maybe the financial situation she alluded to got worse, and instead of embarrassingly sending another message that again reduced the amount of the exchanges, she thought that just blocking was best for her own guilt and feelings.

When others do things that hurt our feelings, it's easy to turn inward and to blame yourself. You look at the things you were already feeling a bit guilty about, and you only focus on them.

In the healthiest of friendships (or any relationship for that matter), both parties need to see what they could have done differently and what they will do differently next time.

If you find yourself feeling down and beating yourself up about a situation, take a pause. Reflect on your actions, but don't forget to be honest about the other party, too.