You are here: Home / Self / Sink or Swim: How You Can Float Away from Fear 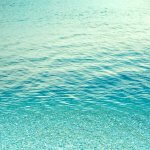 Everyone knows the best place to avoid the summer heat is in water! So on that hot August day, my siblings and cousins and I made our way to the hotel swimming pool for what could only be an afternoon of fun in the sun. We were playing and splashing and life was going well, until my older cousin decided to teach me how to float on my back.

So she decided to stand right beside me, with her arms underneath to catch me if I started to fall. A fool proof plan right? You’re probably reading this thinking, “No, silly, you’re not going to drown if she’s standing there beside you.”

But do you think that my little brain fully accepted that fact? No. I was scared. I didn’t trust the laws of water and swimming enough to believe that I wouldn’t sink (let’s be honest, I still don’t completely understand how a boat doesn’t sink). I believed my cousins wouldn’t sink when they did it. I thought they must have some secret knowledge about floating that kept them from going under, and since I kept sinking, I must not possess it. I was doomed to fail.

Even with their encouragement, it wasn’t long before I was fighting tears. I kept muttering, “It’s too hard. I can’t do it. I just can’t. I want to quit.” It simply seemed too hard. I’d tried. I’d tried a few times. I tried to do it alone. I’d tried to learn how to float with their help. But since it still wasn’t happening after 36.2 attempts, obviously I was just going to go through life not being able to float. But at least I’d be alive if I walked away and quit now. I had managed to find a way to accept failure and defeat in about 45 minutes.  How sad was that?

Accepting failure at 8 years-old? Awful. Accepting it after 45 minutes? Even worse.  Not believing in myself (or in others whom I trusted)? Tragic. Giving up on something that was easily in my grasp? “A fate worse than death,” as my dad would say.

Happily, I did learn to float before we left the hotel. In fact, I’ve even taught a few kids to float, too.

But my experience taught me a valuable lesson about failure and success. In life when we come across new situations, we can choose to sink or swim. At first, we tend to flail around because fear gets the best of us, and it feels like we’re sinking towards failure. Maybe we don’t understand what we’re supposed to do. Maybe we’re afraid of not doing it right. Maybe we’ve wanted it so long, that we find our self procrastinating now that it’s finally here. Or maybe we think that everyone else has some secret to success, and we’re doomed to failure simply because we’re not them.

Whatever the reason, fear is often behind all of us when we face a new situation, a dream, or reaching a goal. Fear is actually not unique to anyone. But the thing that makes the difference between sinking or swimming is facing our fears head on and believing that we, too, can do it.

So take a moment and look at your list of hopes and dreams. Will your fears sink or swim?