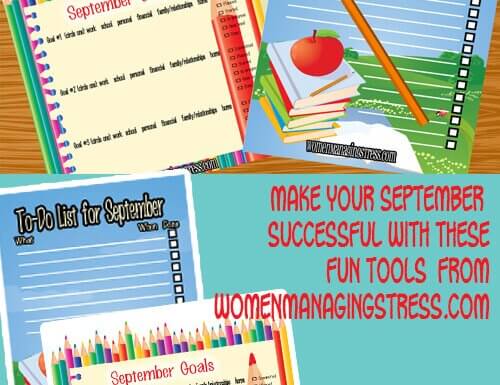 Today kicks off a month-long challenge for me to post every day. And what better way to kick things off than with a set of sheets to help you with some stress-free goal planning? 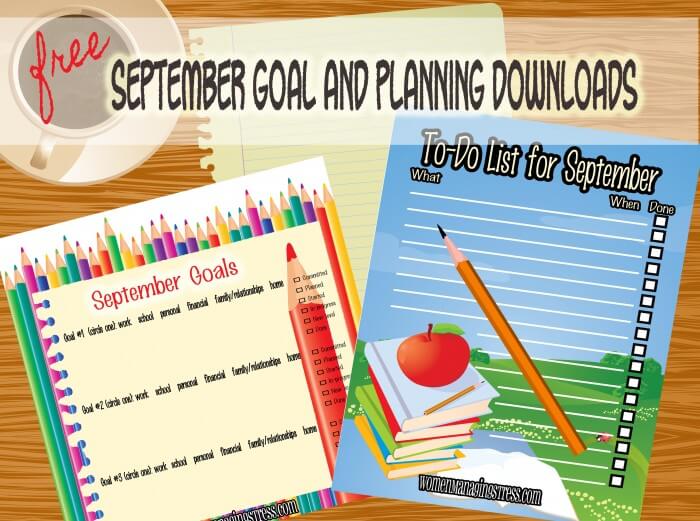 Now this isn't your grandma's goal planning. For one, I designed it to be happy and colorful, because hey, feeding your senses with lots of bright, happy things is one way to beat stress.

Two, I designed it to help show all of your progress. I don't know about you, but I can sometimes be a bit of an overachiever. I even bite off more than I can chew (I know, that's just sacrilege, right? 🙂 ). And though I may make progress on a goal, I often can't completely check it off because things that matter take time.

That's when I sometimes get down and feel bad because it's not completely done.

We're not about that here with these planning sheets.

First, you'll start off with a reflection of what you did well last month. As busy women with a lot of stress, we tend to be focused on doing and achieving and growing. Often, that translates into always looking for what didn't work, and never giving enough focus on what went well.

Don't skip that first part, OK? It's really important for you to nourish yourself and to acknowledge what you're doing that's working. Nothing is “too small” or insignificant to list here. So if you've stumbled onto an insight that only checking your email at 3pm helps you to focus, or that unloading the dishwasher right before you start a new load instead of loading it along the way works for you, then list it! Your success doesn't have to be Nobel Prize worthy to the rest of the world to make a world of difference to you.

Oh, and should you think of several things that you did well last month, go on and list them. There's no limit on success!

Then, from your experiences, what do you want to do differently this month? Again, this doesn't have to be earth-shattering. Changes that last are often done in small increments. So pick one thing to tweak. Pay attention now:  just one.

Why? Every success paves the way for more success, no matter how small. So you're going to set the way to feel even better about yourself one month from now. Who has time for feeling down? Life is tough enough. By limiting that you want to tweak to one thing, you're giving yourself the gift of focus. That is what makes the big things happen- focusing on one small change at a time. Go cold turkey on small things, not big things, OK?

This next part is actually one of my favorite things on these sheets- pick one thing that you're giving up.

Yes, it can be something like sugar or smoking, but I have found that I like to give up negative mindsets when I do this. This past spring, I gave up my disdain for the month of March. March has long held some bad events for me, and I typically get really tired of winter and cold by March, so it's a month of ick. But this year, I decided to give up my March mood. I worked out a plan (just like what we're doing in these steps), and, no lie, it was one of the best Marches I've had in over a decade.

So I like to give up saying stuff like, “I never get this right,” or “Good things never happen to me.” That stuff doesn't do you any good anyway, so why keep it around?

This sheet is pretty straight forward. But this is where you get to give yourself credit for things that you may not have in the past.

First, you'll write down a goal. Then circle if it's a goal that focuses on you (personal), finances, your family and/or relationships, work, school, or around the house.

Then, you'll notice some check boxes to the right-hand side. These are listed in order. Here's what they mean:

Recognizing all of the levels of progress you make is another one of my favorite parts about these sheets.

You'll also notice some questions on the side of this sheet. As you're planning, take a moment to reflect on what's held you back from doing this in the past. Many of the goals you want to achieve aren't new ideas that you've suddenly had. They are things that you've thought about for a long time. My goal is to help you finally put them into action- and more importantly, eventually completed (that's why this is going to be a monthly thing on the 1st of each month on the blog).

So take just a couple of minutes to think of any things in the past that may have kept you from putting these goals into motion, OK?

Then, your mind is naturally going to think, “Oh crap! So I solved that problem, but now I have this in my life that's going to make it hard for me to do it. What now?” Go on and tackle that little issue while you're thinking about it.

Finally on this sheet, you'll see what prompts to help you determine what it would take for you to make this happen. If you're feeling a bit overwhelmed by a goal, say walking a half marathon, then really focus on the idea to “shave it down” a bit to make it more doable. If any goal feels too big, it doesn't mean that it's impossible for you to achieve. It just means that you need to shave it down (and keep shaving it down), until it doesn't feel so overwhelming. The same things goes for procrastination. If you're putting it off, then it's too big. Shave it down so you'll actually take action.

For example, you may not be able to sign-up and complete a half marathon that's being held next weekend. And you may not be ready for the 5K that's in two months. But you can start by walking around your block every day. And then walking about it twice. And then adding on another block and walking it twice.

Shave it down until you think, “Gee, that's doable. I think I can try that and be successful.”

This isn't about setting yourself up for failure. Every great thing starts somewhere. No step is too small at all.

And what planning set would be complete without a to-do list? From the monthly cable bill, to changing your filters or getting the tires rotated, put all of those random things here that you always mean to do, but somehow forget about.

Also, any steps that you need to take to help you successfully complete those steps to your goals, list them here, too. Again, get as specific as you need. (I have been known to write down “brush teeth” just so I can feel the fun of crossing it off when I'm feeling really behind and like I'm not doing so hot.)

So there you have it- three sheets to help you feel organized and like you can reach those goals. Whether your goal is to tackle a stretch of highway that's previously given you a panic attack in the past, or to finally make that doctor's appointment that you're scared of, or you're hoping to bring up that topic that makes you shake in your shoes, goals are one great way to help tackle your stress.