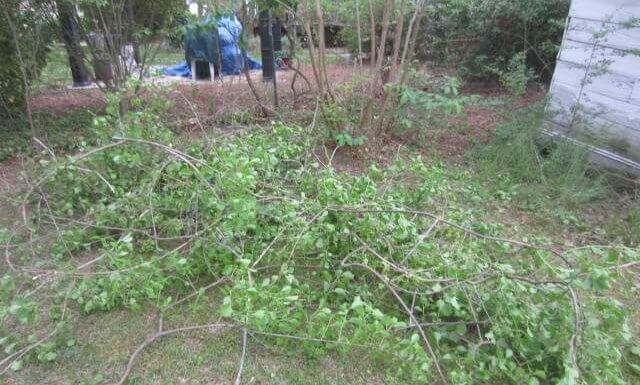 You are here: Home / Self / The Vine that Had No Boundaries

Have you ever had a spur of the moment idea to do something that seemed like it would be quick and easy, only to get completely involved? I had that today. After a full and productive day, I was putting all of the outdoor tools up in the barn when I found my long-lost hand clippers. I hadn't even realized how long they had been tucked away, hidden under some flower pots on the barn. So I decided I've give them a quick clip. Nothing much. Just a couple of snips and I'd call it a day.

Ha, ha, ha. I walked over to this one section of the yard where I've been focusing my attention and did a quick, simple “snip.” And another. And oh well, I'd do just one more. And then I looked down at the grass and saw my pile of very long vines. I drug them to the trash heap and came back feeling quite proud of myself. And then, it happened. I saw how the vine had grown and strangled my tree. It wasn't just the one long tendril that was laying on the ground. But the vine itself had become as thick as my tree trunk in places. And as I followed it around and around the tree, I saw that it had actually grown into parts of the trunk and left permanent grip marks burrowed an inch deep around and around the smooth bark. No wonder I wasn't sure if I had crape myrtles in the yard. The vine had completely overtaken the trunk, the branches, and the leaves. Now I knew why I hadn't seen flowers on these trees in years.

At this point, I was mad. I was mad at the ever-creeping vine and I was mad at myself for not taking better care of my home and garden. The more I saw that the vine had taken over the tree, the harder I pulled and tugged at each little off-shoot, hoping to make a difference.

It wasn't long before I realized that this project was probably going to take time. I was only so tall, and the vines had tangled and grown up more than twice my height. But if I clipped the vines where I could reach and waited, then they would wither and be easier to untangle. So I set off clipping here and hacking there.

And that's when I had the BIG epiphany: vines have no boundaries. My therapist hat went on, and while my hands kept trimming and pruning, my brain started racing. Lack of healthy boundaries is one the biggest sources of stress that I see in the women I work with. Let's take a closer look at that…

In life, it's easy to get busy. It's easy to focus on the things that really do need your attention. And often you get caught up in those things and forget about other things that also need your attention. One of the biggest things you can do to help prevent stress is taking care of yourself. In order to have the time to do self-care, it requires you to have healthy boundaries. You have to plan your time. You have to say to things. You have to be committed and determined. But since it's yourself, you move your needs to the bottom of list and put everyone else first.

Boundary Mistake #1: We put everything into the thing we're focusing on, instead of being well-rounded and taking time for self-care. All work and no play makes Jack a  stressed-out boy, right? But that truth goes out the window.

So just like a harmless, tiny, little green weed that's poking it's head up out of the ground, it's little, so you pay no attention to it. It's not a stressor at this point. It's just a one time thing.

You may do it with your weight: “Oh, it's the winter. I'll lose it before swimsuit season.”

You may do it with your relationship: “I'm so tired today. I've been going all day. It's OK if I don't give a hug or kiss.”

And yes, in those instances, it is OK. It's not that big of a deal. It's just one time. Or something small. It's not much. Doing any one of those things once or twice isn't a danger to your boundaries. But when it becomes a habit and not a healthy one time boundary adjustment, then it becomes a stressor.

Boundary Mistake #2: We get used to it. We'll come back later and take care of it. But the stress of making the change is too great. It's a habit. People expect it of us. It's more stressful to change than to leave it like it is.

When the yard is freshly mowed, it's easy to see that weed sticking up, growing faster than the others. And it's ever so much easier to just go on and address it now, before it multiplies and becomes a bigger worry and chore. But because it's just one thing, we don't pay attention to it. We get used to it. And then we start to mow around it. We'll come back later and weed-eat.

And that's just how it goes in our life, too. We get used to paying $3.00 for coffee every morning. We get used to those five extra pounds. We get used to not giving a hug and kiss when we leave and when we come home. And that's when the vines really grow. They have our permission because we didn't pay attention. And over time, what started out as something really small and insignificant becomes something that takes over.

The budget is blown. There's too much month and not enough paycheck.

The distance in your relationship is painful, but you aren't sure how to change it.

And just like the tiny vine that grew as thick as the tree trunk itself and wrapped its way slowly around and around and around until it became one with the tree, our choices grow and become one with who we are and how our life has become. When we suddenly realize it, the guilt and embarrassment set in, and it seems so stressful. HOW did it get this bad? HOW do you fix it? HOW long will it take? HOW will it ever get back the way it was? Is it too late?

As my brain continued to think about vines and boundaries and clippers (Oh my!), I thought, “My mom is a gardener. She'll know what to do. This is going to take some time to clean up. If only I know how to clean up this mess the way she would.” And as I got a little discouraged, I set some small goals for myself. “Clip here and let it dry up.” “Pull here.” “Try to unwrap the vines from where you can reach before you call it a day.”

Suddenly it hit me, “I may not have the gardener's instinct and knowledge that my mom has, but I do have knowledge on how to fix overgrown issues. In gardening, they call it vines. In therapy, we call it ‘boundaries.' ” So I made the tree my client. And the vine became the boundaries we were working to improve.

And little by little, as I followed my plan, I could see progress.

Step One to Strengthening Boundaries: Focus on your goal/plan.

I started focusing on what I needed to do, instead of how it got there and how bad of a gardener I've been lately. As I did that, the overwhelming situation became much more doable and less stressful. Sometimes I had to re-evaluate the path I was taking to prune part of the vine. But I kept to my goal, even if I did have to make adjustments to the plan at times.

Step Two to Strengthening Boundaries: Stick to your plan, even if it seems a little tricky at times.

The more I did, the more I started to see how to unravel the puzzle of the vine. I pulled a little here, tugged a little there, and I actually got off more of that vine than I thought I could in one evening. I stuck to my plan, even when it was a little tricky. Things that would have made me freak out and feel stuck before were now manageable. I could figure out what to do next, even when I wasn't exactly sure.

When I was done and I looked down at the pile of vines I had managed to pull off, I was astounded. The tree I thought was so shady and so big was actually quite puny. The vine had merged itself with the tree, zapping it's ability to growth and flourish. And instead of the tree giving off the shade, I discovered that the shade came from a vine that had been preventing my tree from growing and blooming.

Once the time is right, I'll actually prune the tree itself. But it needs some time to heal and strengthen. Besides, I have some other vines in the yard that need healthy boundaries! 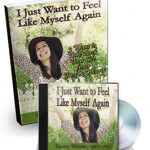 Tammy Whitten provides individual, family, and marriage counseling in Greenville, NC. She focuses on stress, anxiety, and depression with her clients, and also shares online programs with those not in her area. Be sure to grab your copy of “I Just Want to Feel Like Myself Again: 3 Ways to Take Back Your Life from Stress & Worry” by clicking here.